Are we going to miss the start of the race? 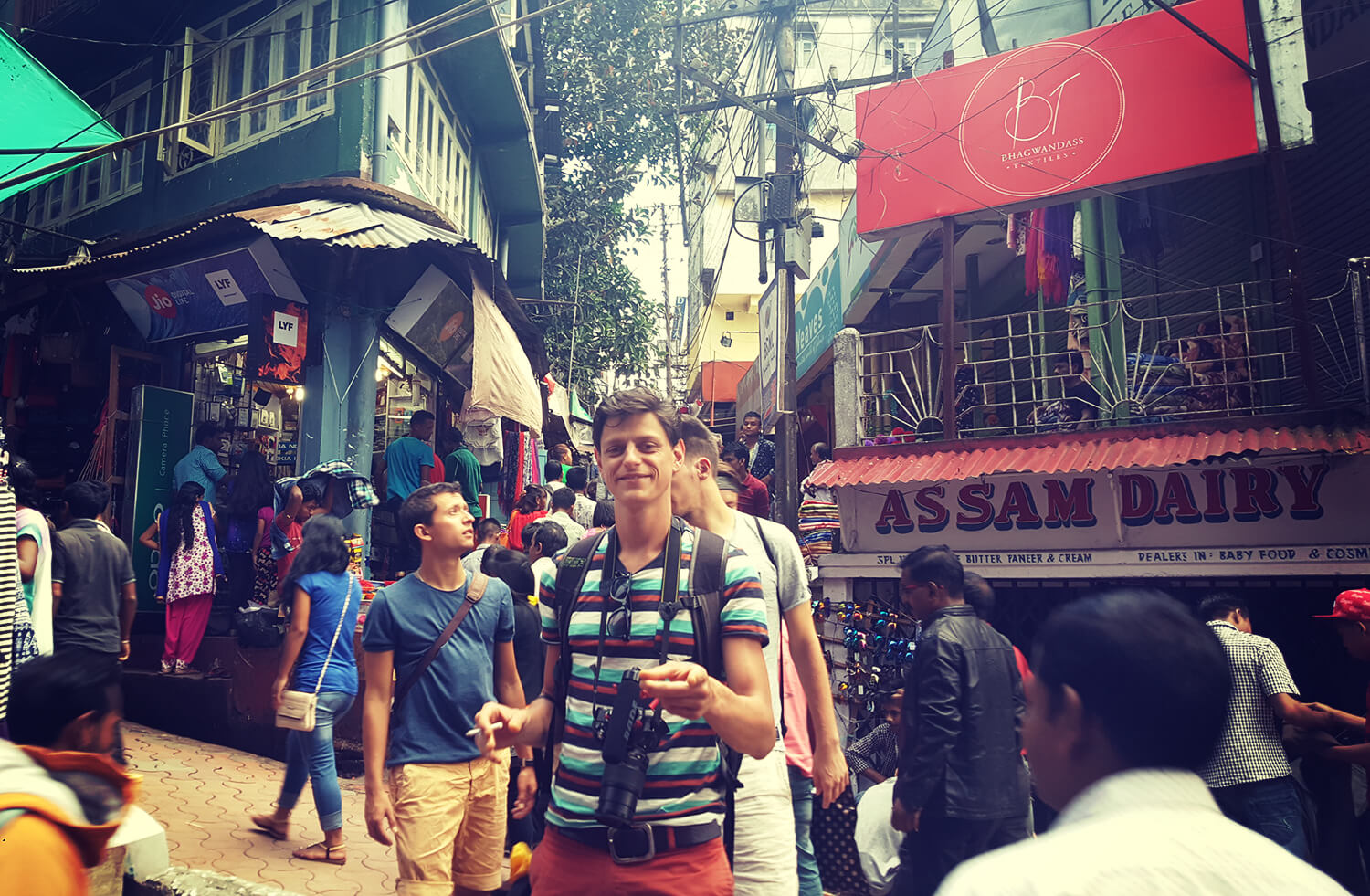 Yes! It was finally time to take a look at the rickshaws themselves and sign all the paperwork. In our minds we had planned to start some shopping as well, but as would be proven day and day again, everything takes a whole lot more time than you initially calculate or would expect. So no shopping.

However we did learn a lot about our future auto companions. Especially about all the things that can break down (an awful lot) and how these tuk-tuks are not made for what we’re going to do AT ALL. Actually almost all the talks were spent on what can go wrong. Except for the mechanic talks, these were about how you can fix the problems. Oh and then one more thing that was told over and over again: AVOID DRIVING IN THE DARK, it’s super dangerous.

Alright then, after all that was sorted out, it was time to do some shopping the next day. There was a big list of things we needed (lots of tools and handy parts) or we just wanted (lots of fun and pimping things). Unfortunately we had our second man down already and Joep had to stay home having a fever. Luckily our first man down (Paul) had recovered from his diarrhea, so we had enough man power. Bastiaan, Jesse and Raymond would go shop for all the mechanical and engineering tools and parts, while Jeroen and Paul would go to a different district to buy everything else. They would meet again at the rickshaws between five and six o’clock in the afternoon for a party hosted by The Adventurists later that night. 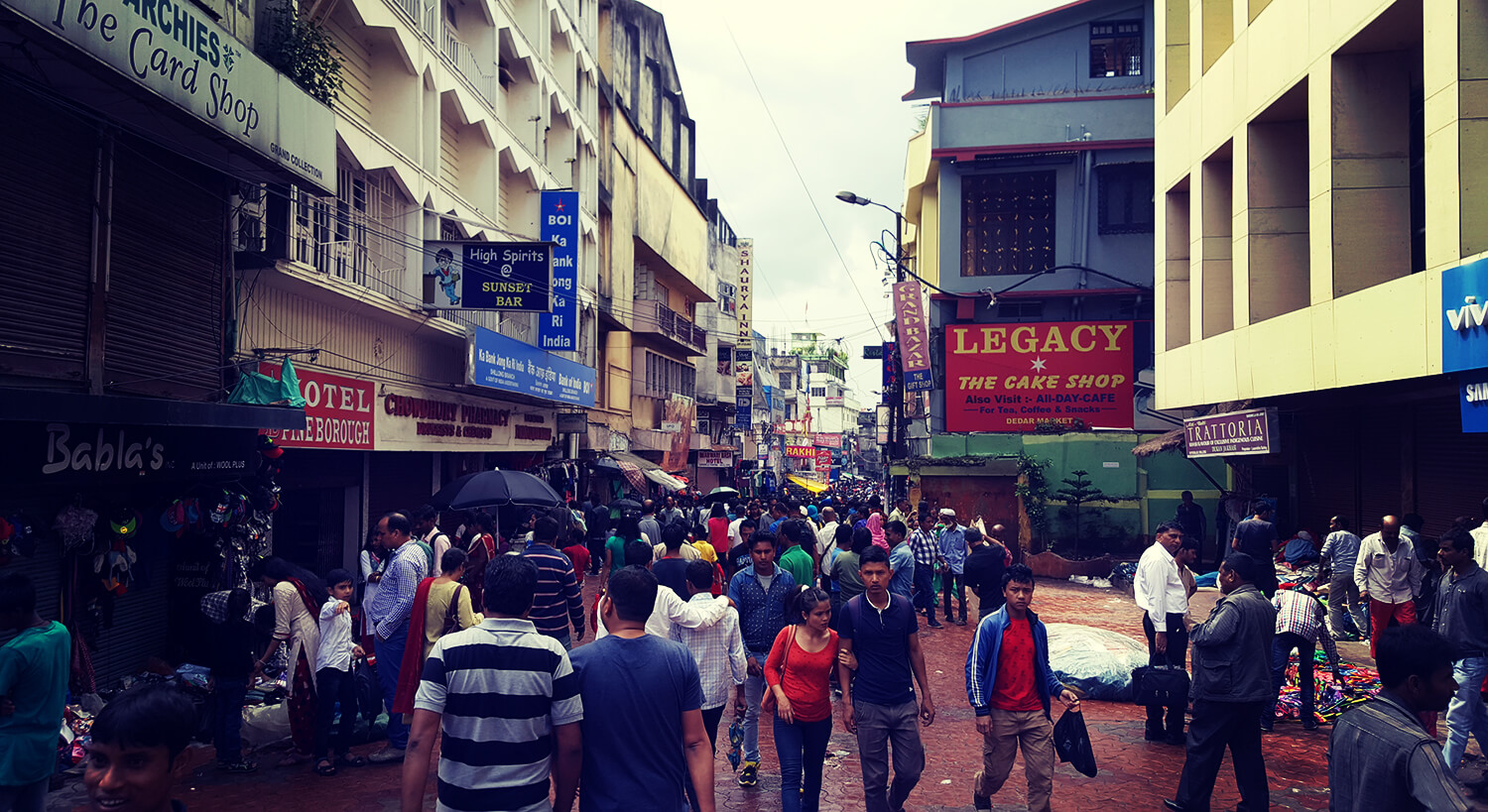 Shillong, Shillong, what do you have to offer us, oh Shillong?

Things went pretty smooth for Bastiaan, Jesse and Raymond. The Polo bazaar market area was full of motor and engineering parts and so the stuff they needed was easy to find. There was plenty of choices and they came across some awesome things they convinced themselves of that they absolutely needed without a doubt. They were right on schedule when it was time for some crazy good dumplings.

Meanwhile over at Jeroen and Paul, things already went a lot differently. After a late start they probably had covered more shops than team mechanical, but with just one bought item. They kept being sent from shop to shop. However the local people genuinely wanted to help so what Paul and Jeroen needed to do was ask the right questions and make conversation.

Over at Joep in the guesthouse. Joep was still sleeping.

At the same time Bastiaan, Jesse and Raymond had just decided upon which speakers with build-in subwoofer to buy and what kind of LED-coloring strips would illuminate our rickshaws in the most awesome way. They had decided to save time and don’t do a lot of bargaining. Surprisingly they were going to finish on schedule with their whole list completed with less than five shops covered.

Team ‘all extra things’ had just successfully secured three cowboy hats and some toy bow and arrows. And no, you don’t want to know how hard that was to buy in India. They were now continuing their search for shop #3278 where they hopefully could find the long sought for g-wire. Their shopping experience couldn’t be more different than team mechanical. They nearly always had to do with what they could find, but then always bargained their asses off to get a better price, which was fun for them, but also the locals seemed to enjoy. A lot of people were met and they got to know the people of Shillong a little better. Boys grinned and pointed towards Paul and Jeroen, while girls often giggled and smiled while trying to make eye contact only to quickly look away when they succeeded. 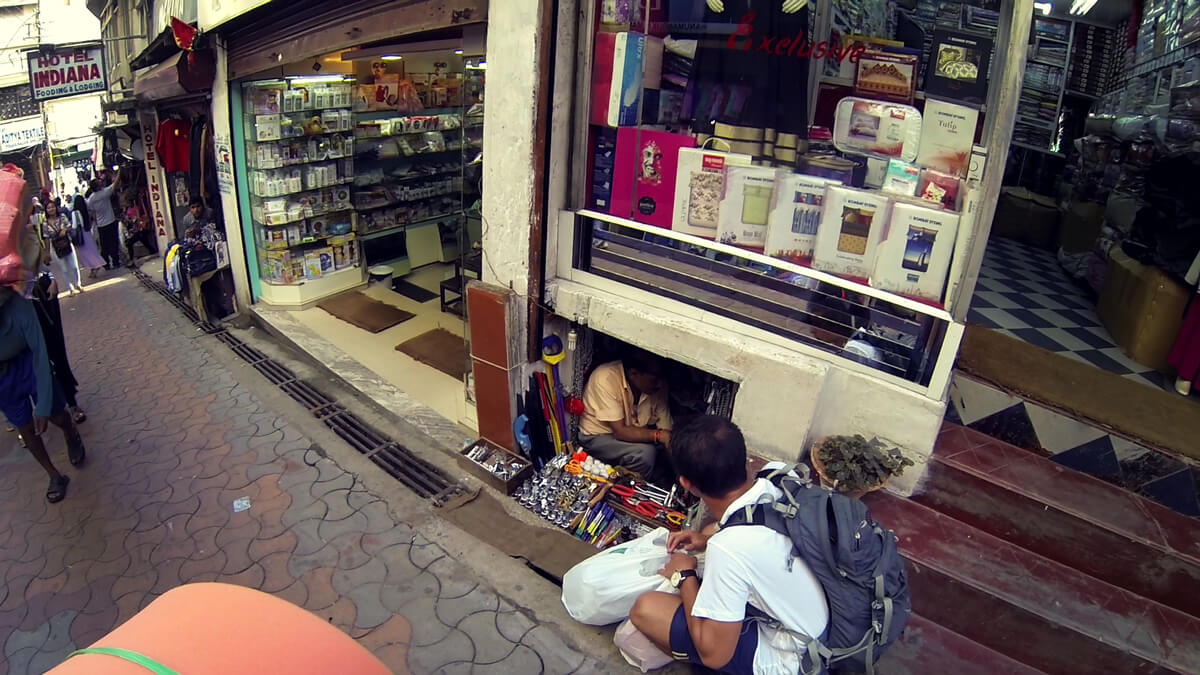 Late for the party

It was somewhere between five and six o’clock and Bastiaan, Jesse and Raymond had dropped off their stuff at the guesthouse, picked up Joep and were on their way to the rickshaw meeting place. Jeroen and Paul however were still somewhere walking deep into Police bazaar in some small smelly alleys looking for shop #over9000. There was no wonder they had a hard time finding it, not only were directions always very minimal and shops often build on top or inside each other, this time this must have been the smallest shop they have ever encountered in their lives. On street level, there was a square carved out hole in the wall where a man was sitting – barely fitting in – selling all kinds of handy tools all placed or hanged very carefully, making the most of the little space that was his shop. It seemed like a secret vendor straight out of some lovely fantasy setting.

When it was fifteen minutes past six, Paul and Jeroen gave up on finishing their shopping list of 30 or so items and hasted themselves to the guesthouse and took a taxi to the meeting place. There was a reason we were to meet at the rickshaws, because that would be the place everyone of the 70 teams would meet to be picked up with a bus to go to the party. The party was quite poor, so we got drunk playing drinking games and acted like idiots dancing crazy on goa and drumming on all kinds of tools.

They see us rolling!

The next day we had the third man down, Jeroen was on diarrhea that was above his capabilities. (Up to today he still holds the record of having to go to the toilet 15 times on one day). You see, two days before everyone did some spicy challenge eating peppers and other hot stuff. This gave diarrhea to most of the group but totally blew up Jeroen’s stomach. So he stayed home, while Joep and Paul would finish the last shopping lists before joining Bastiaan, Jesse and Raymond in pimping the rickshaws.

The atmosphere was tense and stressful as we only had one day left to pimp and fix everything. You could tell we were part of the teams that were latest in doing these things, so day work turned into working in the evening. It was hard work, but boy oh boy were we proud about the end result! Ladies and gentleman, we proudly present our two rickshaws Red Bows and Blue Guns!

That afternoon Joep had returned to the guesthouse as his fever had returned. Later he came to the conclusion that the description on his malaria medicines were wrong and he should’ve started a week before he entered India. He was stung by a mosquito on day one. So we called in a doctor to check upon him the next morning – the day of the start of the race. Things were not going smoothly at all.

The next morning Jeroen would stay with Joep to wait for the doctors while the rest would start the race. The plan was that Joep and Jeroen would catch up on a meeting place later. But of course we would screw it up a little more, because team ‘race start’ ended up forgetting the key of one of the rickshaws. So only one rickshaw ended up doing the start. Oh man oh man.

Turned out the doctor we ‘called in’ was part of a whole medical centre below the guesthouse we never even knew about that existed. Literally, if you would continue walking down the stairs from your room to the reception and then breakfast room, you would find a whole medical clinic of four floors! Yes we were super surprised as well. It turned out Joep didn’t have malaria, but they wouldn’t let him and Jeroen leave until both received proper medicine for what was left of their illness. Then a taxi took them to the meeting place, where we would have a massively delayed restart of our journey. 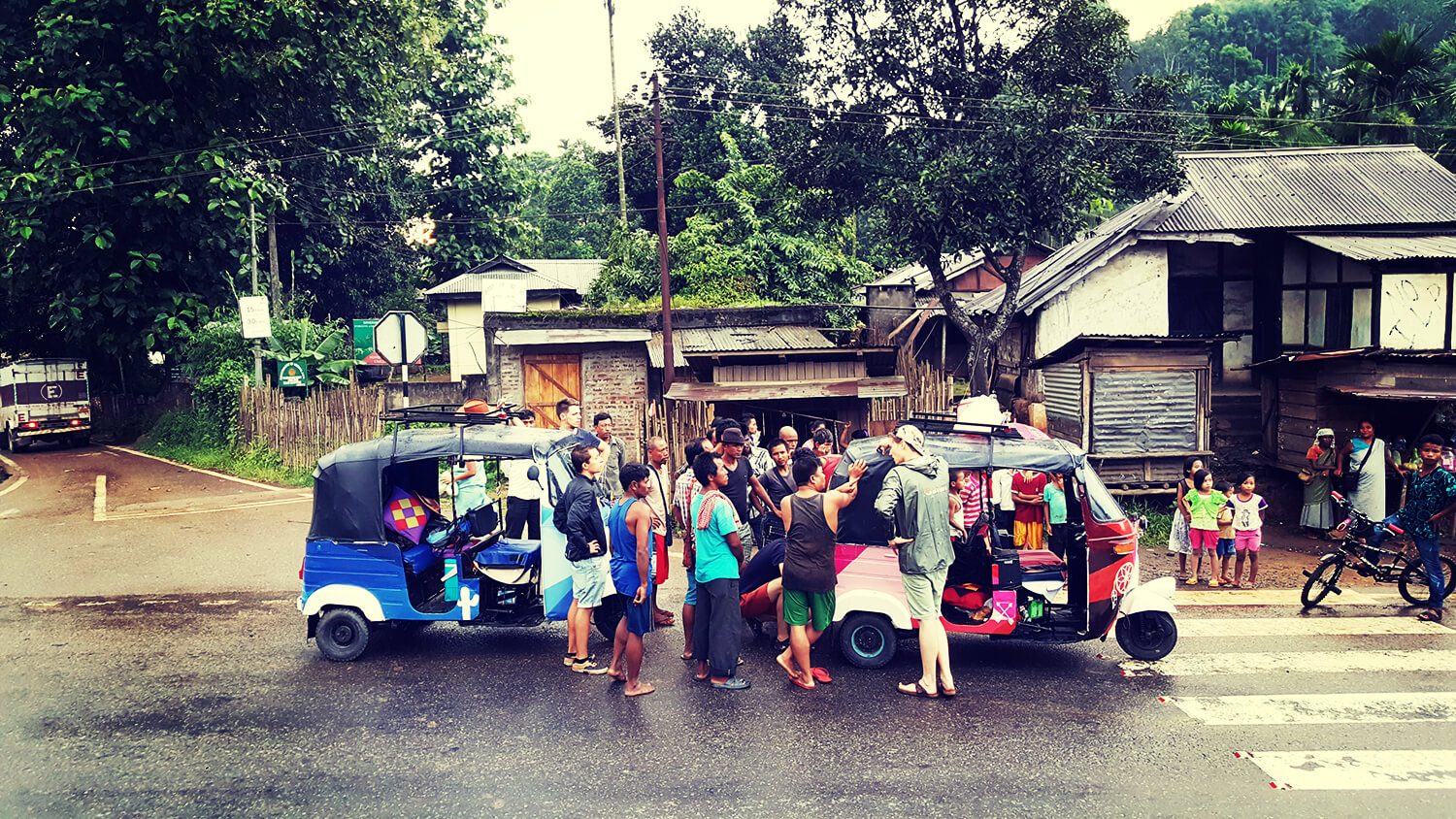 Everyone was having a blast driving the rickshaws. We were driving like true Indian people, overtaking everything we could, blowing that horn whenever we could find an excuse and added a little excitement of our own to the flavor by drifting on the wet curvy and surprisingly broad mountain highway. Oh yes, oh yes, this was it!

Four hours of good fun and then it happened.. our Red Bows rickshaw broke down.. on DAY ONE! Raymond is our number one guy for fixing the rickshaw, while Jesse is our backup. Raymond put up a courageous effort and was able to figure out what the problem was – a clogged carburetor. It was not something he could fix though, so Paul jumped in another rickshaw of a local to get a mechanic. One hour later and it was fixed.

We had already given up hope to go any further then Guwahati (where we landed when we arrived by plane), but now even that was uncertain. Less than an hour before it would turn dark, and we were at least three to four hours away from Guwahati….

In the next blog: Even more breakdowns, bad luck and questions like are we ever going to make it!? 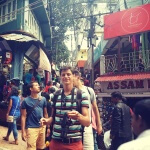 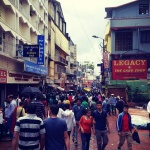 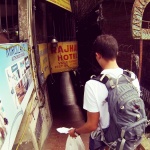 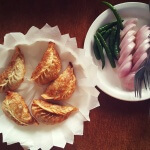 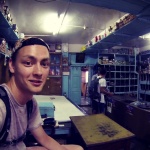 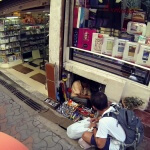 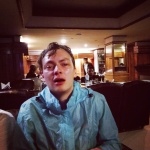 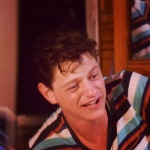 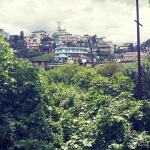 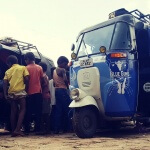 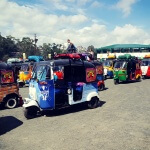 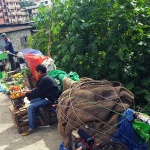 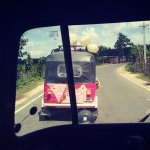 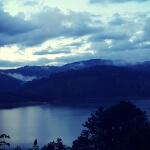 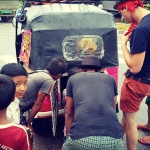 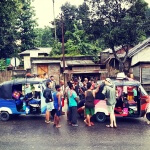