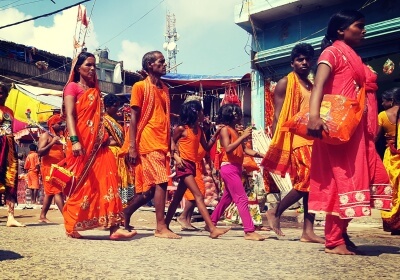 Onwards it was to our destination Bodhgaya! We were entering the state of Bihar and this state by itself has already more than 200.000.000 people! To put that in perspective; that’s more than all the people of Brazil! And Brazil is not something of a small feat, it’s number five on the list of being the most populated country. It’s just that India is that crazy.

Now of course, what better way to see the forming of the masses by unknowingly running into a huge celebration of the god Shiva? It began with sporadically spotting people all dressed up in orange, until bigger and bigger groups started to appear doing all kinds of festivities like washing en masse in the water of the river Ganges.

We were caught off guard when we had to cross the city of Bhagalpur and turned the corner of a street only to find one side blocked. So we turned left, followed the road until we got stuck in hordes of people celebrating. This was amazing to see and of course we had to know what this was all about. We pulled over and asked some locals what was going on. We were told it was a 9-day celebration of the god Shiva and it didn’t take long before they got us all dressed up in orange too.

It felt a bit weird at first since we are not Hindu, but the people around us ensured us it’s more about celebrating to be in good spirit and show gratitude. They loved it when we joined in and we only received positive replies throughout our journey that day. There was only one problem… it quickly turned out it was nearly impossible to leave the city. Traffic jams EVERYWHERE!

Trapped in the city of Bhagalpur 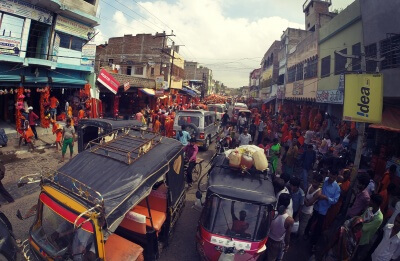 At some point we were stuck for a good while and we talked to all the people that showed interest in what the hell these foreigners in orange clothes were doing with two rickshaws. Every time we asked for directions they would point towards a direction with a long line of cars and other vehicles that were waiting. We sent out Joep and Raymond to scout ahead and see how far the traffic jam would go and if there were any other possibilities, but it seemed to be endless. We needed to get to a bridge first and that bridge was almost completely stuck, with the only movement being the people slowly walking over the bridge. Oh boy, this was going to take hours and then maybe even more, because celebrations can go on until deep in the night. Is this Guwahati all over again?!

Then Jeroen took a long look at the map trying to figure out where we exactly were and he noticed all these directions the friendly locals were giving were probably wrong. He scouted ahead, saw a possibility to get out of this city and returned with a plan. First, we would ask the cars around them to move a bit while everyone (including locals) would help push the rickshaws back. Then we would drive 400 meters on the opposite direction of the road (ghost driving) with traffic heading towards them. Thirdly, we needed to cross the thousands of people marching by slowly, at a snail-like pace, drive our rickshaws into the crowd. The fourth and last obstacle was to squeeze the rickshaws through the five rows of cars that were all stuck against each other. A combination of eager and selfish driving combined with smiles and hand waves did the trick. Resolution!

We had lost half the day with only 50 km on the counter of the 380 km total we needed to make that day. So we already started preparing to drive through the darkness once again, like every day before. However, unlike all the days before, there was no huge curtain of slogs and clouds, but this time we drove towards our first sunset of the trip.

When the sun sets, the darkness grows 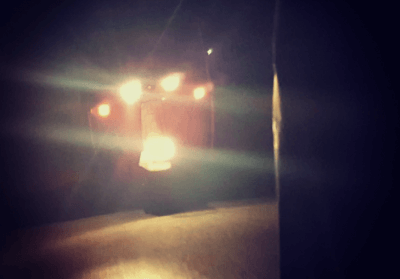 Paul had read and warned us about people in Bihar trying to stop you and to get money from you in sometimes uncomfortable ways. Just before sunset we were about to cross a big bridge. There were small groups of people trying to stop selected vehicles, such as ours. We decided to lower our speed, but to continue driving. It was a weird moment, as these people really tried to stop us and hit our rickshaws with sticks, before we could escape them. We were taken aback with what just happened, but were happy we decided to keep on driving.

Then darkness set in once again. Driving in the dark in Bihar was a few levels harder than what we had experienced before. The roads were way more packed and cramped with vehicles, animals and shitty potholes that can severely damage your rickshaw. Dodging these potholes was often impossible and then it simply came down to guessing which one would be the least harmful. However, the most annoying and dangerous are the big headlights of every vehicle coming towards us on the opposite side of the road, which were constantly blinding us completely. It would render us impossible to see what’s going on and look ahead. And it also doesn’t help that people don’t expect rickshaws to be on the road so late at night.

Jesse came up with a brilliant 21st century idea though. He suggested instead of searching for a hotel and wasting a lot of time, we could call a place to stay upfront and reserve it, so we would know immediately where to go! Seriously, you don’t think of these normal, common sense ideas when you’ve been hectic all the time and experience sleep deprivation. We looked in our Lonely Planet guide and booked three rooms for the six of us. 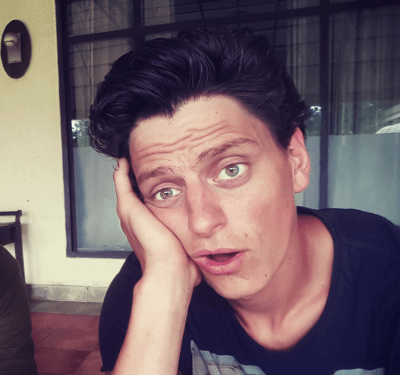 To us it didn’t feel as a decision anymore whether to continue onwards or to stop and sleep. We just had to make up for all the lost kilometers before we could decide to have some more sleep again. Hence, we kept pressing onwards to our planned destination and hotel rooms. But whether it was due to a lack of sleep or being continuously on edge while driving in the dark, at some point we were bound to do something stupid again. This time it was Raymond with one of his classic one-man shows where he would forget and lose his own stuff.

As we were getting closer to our overnight stay in Bodhgaya, he suddenly realized he had forgotten his small backpack with his passport in it on a bridge we stopped earlier to shoot some footage. Chances of that bag still lying there were slim, but we had to try as it might not have been spotted because it was dark. We arrived at the hotel, unpacked all the rickshaws and then Jeroen and Raymond took the fastest tuktuk to race back to the bridge. Playing techno music with tense buildups through the speakers, Raymond using his autocross skills from his past and Jeroen hanging out of the rickshaw to spot bumps in the roads, the two of them set the top speed record that night. To add some more thrill to this ride, they were chased by dogs (while racing) on two occasions, which felt kind of random to them as well.

Somehow luck didn’t let us down this time and Raymond’s bag was still there!

The blessed atmosphere of Buddha’s enlightenment 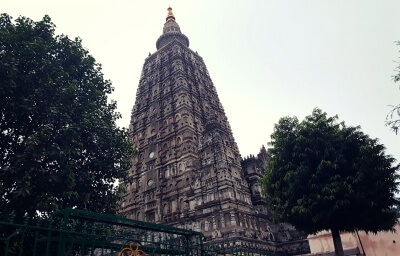 After a late-night dinner, it was time to go straight to bed, only to awake three hours later to try and see the Mahabodhi temple at sunrise. Of course we would mess up something, which in this case meant we were actually one hour early, and we had to wait one hour in the darkness before the gates would open and any sunrise was to be experienced. Besides that, we were not alert enough to read any signs. When the gates finally opened half of the group had to go back, because no bags and cell phones were allowed inside the temple premises.

Mahabodhi temple is dedicated to Buddha and it’s the place where Buddha himself found enlightenment. It’s a sacred place foremost and not some fancy tourist attraction. Monks from all over the world came to finish their long pilgrimage towards this place and sat together in big groups doing all kinds of prayers. The atmosphere was definitely a must to be experienced as it was so serene, peaceful and divine. There were plenty of dogs there, but they would never bark, which is in stark contrast to their behaviour just outside of the temple premises. Opinions about the temple were divided in the group, everyone thought it was nice, but some had seen more impressive structures on their travels. Everyone agreed though that this was hard to beat when one judged the atmosphere and overall feeling of walking among something so holy and meaningful.

We lost track of time as everyone went on their own pace discovering all kinds of little things they cared about, such as the history of Buddha or following a local monk into doing certain prayers. When normal daily life was about to start we left the religious space and went for breakfast.

In the next blog: A fish on our roof?! What?!! Should we go left or right? And of course… more unplanned chaos! 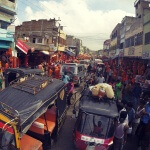 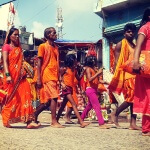 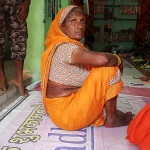 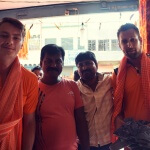 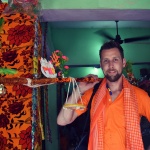 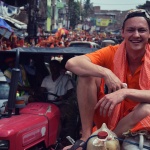 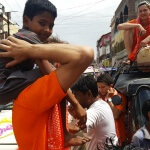 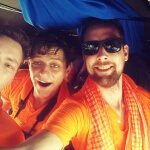 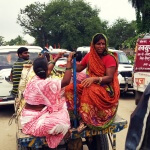 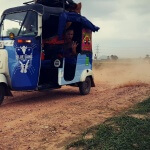 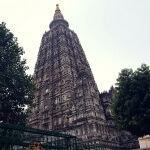 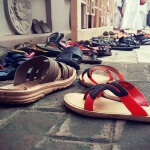 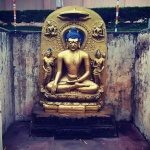 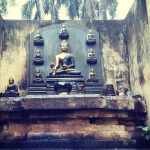 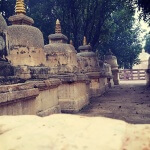 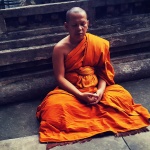 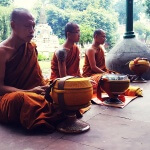 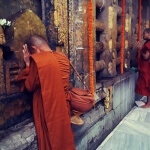