Can you imagine Earth without forests? Here are some deforestation facts that can be shared to raise awareness about our environment:

1. 20% of the world’s oxygen is produced in the Amazon forest.
2. Forests cover 30% of the earth’s land.
3. Soil erosion, floods, wildlife extinction, increase in global warming, and climate imbalance are few of the effects of deforestation.
4. It is estimated that within 100 years there will be no rainforests.
5. 44% of the junk mail goes unopened.
6. One and a half acres of forest is cut down every second.
7. Loss of forests contributes between 12 percent and 17 percent of annual global greenhouse gas emissions. (World Resources Institute)
8. If the current rate of deforestation continues, it will take less than 100 years to destroy all the rainforests on the earth.
9. The rate of deforestation equals to loss of 20 football fields every minute.
10. The total world forest loss till date is 7.3 million hectares per year.
11. According to Rainforest Action Network, the United States has less than 5% of the world’s population yet consumes more than 30% of the world’s paper.
12. The over exploitation of forests is making it extremely difficult to replant a new ecology.
13. Tropical rainforests which cover 6-7% of the earth’s surface, contain over half of all the plant and animal species in the world!
14. Up to 28,000 species are expected to become extinct by the next quarter of the century due to deforestation.
15. 13 million hectare per year in South America and Africa and south East Asia is converted from a forest to an agriculture land.
16. Deforestation affects water cycle. Trees absorb groundwater and release the same into the atmosphere during transpiration. When deforestation happens, the climate automatically changes to a drier one and also affects the water table.
17. Half of the world’s tropical forests has already been cleared.
18. Over 4 million tons of junk is created online by spamming.
19. 4500 acres of forests are cleared every hour by forest fires, bull dozers, machetes etc.
20. Poverty, over-population and unequal land access are the main causes of man- made deforestation.
21. 1.6 billion people across the globe depend on forest products for their livelihoods there by adding more to deforestation.
22. Almost half of world’s timber and up to 70% of paper is consumed by Europe, United States and Japan alone.
23. There are more than 121 natural remedies in the rain forest which can be used as medicines.
24. Industrialized countries consume 12 times more wood and its products per person than the non-industrialized countries.
25. The United States has less than 5% of the world’s population but consumes more than 30% of the world’s paper.
26. Agriculture is the leading cause of deforestation
27. Fuel wood in sub Saharan African countries is consumed up to 200% times more than the annual growth rates of the trees. This is causing deforestation, lack of timber resources and loss of habitat for the species living in it.
28. Trees are important constituents of the ecosystem by absorbing carbon.
29. Worldwide more than 1.6 billion people rely on forests products for all or part of their livelihoods.
30. Tropical forests, where deforestation is most prevalent, hold more than 210 gigatonnes of carbon.
31. According to Forestry Department Food and Agriculture Organization of the United Nations, about half the world’s tropical forests have been cleared or degraded.
32. The world’s forests store 283 billion tons of carbon present in the biomass.
33. Money to save trees is majorly collected online.
34. One can save up to 20 square feet of forest with online contributions thereby conveniently prevent deforestation.
35. Deforestation has considerably stopped in places like Europe, Pacific, North America and some parts of Asia due to lack of agricultural land.
36. 41 pounds of these junk mails are sent to almost every adult in the United States.
37. People in America spend more than 275 million dollars to dispose junk mails.
38. The paper industry is fourth largest in producing greenhouse gas thereby majorly contributing to deforestation.
39. 25% of cancers fighting organisms are found in the amazon.
40. On an average, a person in the United States uses more than 700 pounds of paper every year. 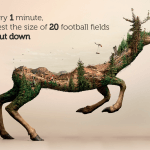